2018 Girls on the Town Sponsors

Downtown Palatine’s 4:13 Fitness: Starting the Conversation About Fitness and Faith 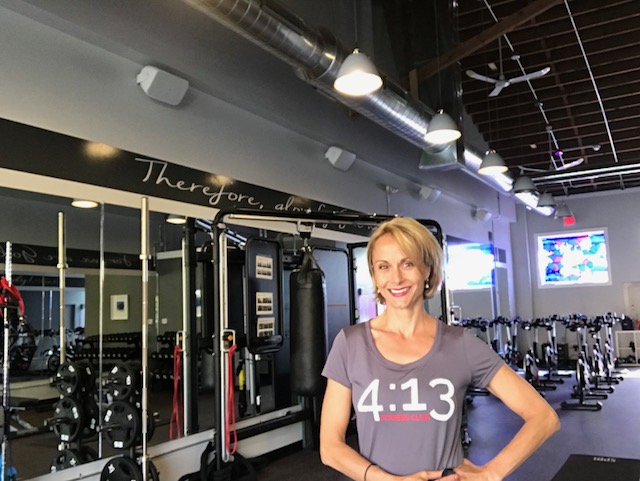 The fitness club opened in early 2018 and is located at 7 N. Bothwell Street; it focuses on the connection between body, mind and spirit.

If you told 4:13 Fitness Club founder Ashley Roberts 20 years ago she would own a faith-based fitness club in downtown Palatine, she probably wouldn’t have believed you. That’s because the Oklahoma native needed to first walk a number of professional and personal paths before finding the one that led her to what she is doing today, which she describes as her true passion.

Health and fitness was always a part of Roberts’ life. As a teenager, she attended a Christian athletic camp, which was her first glimpse into what would become a strong belief in the connection between fitness and faith. While attending college in her home state, she was a part-time group fitness instructor and considered exercise a beloved hobby.

After obtaining her undergraduate degree, Roberts stayed true to her passion by becoming a health and fitness reporter for an ABC News affiliate in North Carolina. In 1991, life moved Roberts to Chicago where she attended law school at the University of Chicago. She received her Juris Doctorate, and became a corporate litigator for a large firm in downtown Chicago.

“It was an all-consuming career that didn’t make my heart sing,” Roberts said.

So, in 2000, Roberts left the practice of law to grow in her faith and ultimately fuse it with her professional life. In 2003, she received an MA in Religion at Trinity Evangelical Divinity School in Deerfield, and began her career in ministry.

“This was the start of the [4:13] journey for me. I worked at some local churches for several years, and then became a ‘late’ parent [parent later in life] and focused exclusively on parenting. When my two children were both going to be in school full-time, I knew it was time to determine what I was going to invest my energy into next.”

She credits a day on the playground with a friend and fellow parent to helping her clarify her future professional direction and path, which ultimately led to the opening of 4:13 Fitness Club. That day, Roberts’ friend confided in her on how unhappy she was with the way she looked, but dreaded going to the gym – that she despised working out.

“I shared with my friend how exercise and fitness were actually spiritual pathways for me – a way to connect with God and deepen my faith,” Roberts said. “This perspective was fresh and almost perplexing to her. So, I knew right then that I wanted to explore this more and figure out how to share this perspective with others.”

After doing some soul-searching and scouring Scripture, Roberts came to believe deeply that the human body is a masterpiece to be cared for and respected, as the Bible describes. She is confident that this mindset can be a strong motivator for others who are seeking to improve their own physical fitness. By honoring a person’s holistic nature, Roberts also believes that faith-fused fitness engages and improves the overall health of the mind and spirit as well.

“We know, for example, that exercise is good for the body and the brain, and that the brain can function even better in regard to insights, clarity of thoughts and new ideas after exercise. This is a time when our relationship with God can also be strengthened, when the mind is open,” Roberts said.

Roberts cites that in western Christianity, there is tremendous focus on caring our minds and our souls, but there is little discussion about the interrelationships and importance of the body and physical health – and its connection to spiritual health. Another goal of hers through 4:13 Fitness Club, is to start this conversation.

4:13 Fitness Club, whose namesake is taken from Philippians 4:13 – “I can do all things through Christ who strengthens me.” – officially opened its doors in February of 2018 in downtown Palatine at 7 N. Bothwell Street.

Though Christianity serves as the platform, Roberts says clients are from all backgrounds and the club is completely inclusive. Everyone is welcome, regardless of religious affiliations.

Classes and programming at 4:13 Fitness Club vary in regard to how faith is ‘infused’ into them. While all classes have Christian music playing in the background, the emphasis is stronger in classes such as spin therapy, which is more of an ‘experiential’ class described as a spiritual journey by those who have taken it. There is also Holy Yoga, which aims to deepen the connection between the body and God, which is very much line with the philosophy of 4:13 Fitness Club. Passages or scriptures can also be used for inspiration during classes by instructors, with different meanings ascribed to different postures, poses and other movements.

Other offerings, such as circuit training and personal training for strength, and cycling for cardio, have a lighter ‘faith element’. Additional programs such as boxing workshops, monthly worship, ‘serve nights’ and teaching/training nights are also available. 4:13 Fitness Club offers programming for youths (10 years of age or older), adults and families.

“The true goal is to remind people that ALL of who we are (body, mind and spirit) matters to God, and therefore should matter to us. We are integrated beings, and the health of one aspect of self, affects the other aspects of self,” Roberts said.

Information on all classes and programs can be found at 413fitnessclub.com. Clients can either ‘drop in’ or purchase a 5-10 class pack. Monthly memberships are also available, and attractive discounts are offered as Roberts works to build a community centered around fitness and faith.