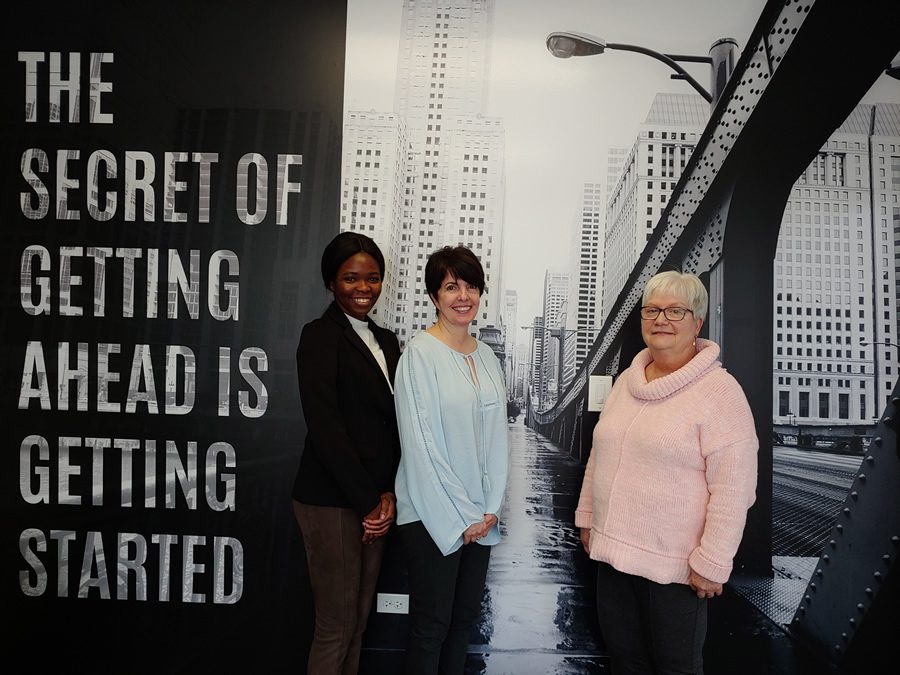 The newest of six Chicagoland locations recently moved to downtown Palatine, and its leaders are focused on building strong community ties.

Pan American Bank & Trust opened its Palatine branch after acquiring the former Bank of Palatine in 2014, and continued operations out of the location at Northwest Highway and Plum Grove Road. As the bank grew its presence in the Village, its leaders chose to move the branch to downtown Palatine in the spring of 2018, in what used to be Smith Street Station location at 190 N. Smith Street, just one door north and adjacent to Durty Nellie’s.

The philosophy from the bank’s leadership is one that encourages the highest level of retail and small business banking services, in addition to community involvement by establishing deep connections through volunteerism and engagement.

Pan American Bank & Trust offers full-service retail banking, including online and mobile, as well as competitive, and oftentimes better CD rates than competitors, according to the Palatine Office Manager and Assistant Vice President, Renee Cabrera. Current CD rates are displayed regularly on a banner in the location’s window off Smith Street, just south of Colfax Street. Another benefit touted by Cabrera is that there is no minimum balance required for any of the bank’s checking accounts.

Pan American Bank & Trust is a Certified Community Development Financial Institution (CDFI), a designation obtained through the U.S. Department of Treasury’s Community Development Financial Institution Fund. CDFI’s have a primary mission of promoting community development in underserved communities. Just 2% of banks in the U.S. hold this designation. The bank also places a strong focus on servicing small businesses with a goal to promote job creation and economic revitalization.

“We specialize in working with small businesses, providing checking and savings accounts, as well as small business loans. We are not as restricted as larger banks, so we are able to customize loans based on the unique needs of our business clients,” Cabrera said.

Cabrera says another benefit is the ‘community bank feel’, in that every employee has a direct phone line, and answers their own calls within 24 hours, if not sooner. There are no 800 numbers, she said, where customers trying to speak to a live person are required to press dozens of numbers to get someone on the line to help them.

Establishing connections in the communities served by all six Chicagoland offices is strongly encouraged and supported from the top down, starting with the bank’s President & CEO, Frank Cerrone.

For example, Cabrera volunteers monthly for the PADS Shelter Program, which is offered through Journeys | The Road Home. This organization provides social services and shelter to individuals who are homeless, or in jeopardy of becoming homeless. She also recently accepted an appointment to the Board of Directors for the Palatine Area Chamber of Commerce and joined the Downtown Palatine Business Association on behalf of the bank. Pan American Bank & Trust has provided monetary sponsorships for events that have supported both business associations since it initially opened its doors in Palatine.

In addition to these involvements, Cabrera joins other Pan American Bank & Trust employees from the Palatine location, the main office in Melrose Park, as well as those from offices in Chicago’s Little Village, Sauganash, Bellwood and Bloomingdale and volunteers twice yearly at Feed My Starving Children.

“Anyone that works here does so because of our culture; it’s all about collaboration, connectedness and community – it’s a real family atmosphere that is supportive and encouraging for both employees, and for our clients,” Cabrera said.

Other examples of service to the community include the creation of the ‘Golden Club’ for senior citizens, which provides quarterly functions and/or educational events. In the fall of 2018, a free seminar was offered on Social Security and Medicare. The Golden Club also hosts several outings for seniors throughout the year.

“We look at ourselves as a strong example of grassroots banking, and work every day to uphold that identity,” Cabrera said.

Upcoming events hosted by Pan American Bank & Trust will include a Ribbon Cutting Ceremony with Palatine Mayor Jim Schwantz beginning at 4:00 p.m. on Thursday, March 14, 2019, followed by a cocktail reception at the downtown Palatine location, 190 N. Smith Street. The bank will also be participating in the St. Patrick’s Day Parade in downtown Palatine on Saturday, March 16, and in the Girls on the Town event, hosted by the Downtown Palatine Business Association on Friday, May 3.